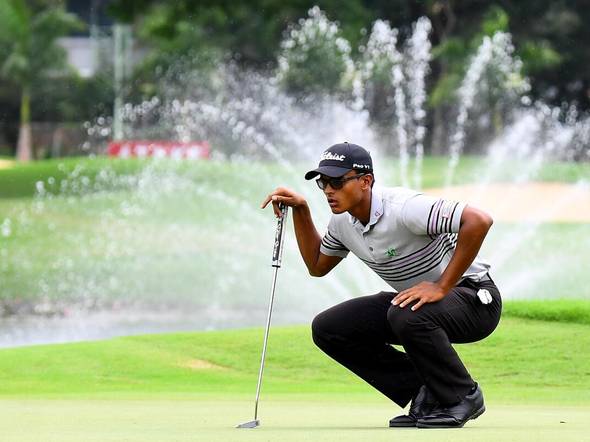 Madappa is T-16 at Liv Series in London; Schwarzel leads

Viraj Madappa, the first Indian in the rogue Liv Golf Invitational Series, opened with an action-packed 1-over-71 and was placed T-16 in the 48-man field.

He was six shots behind South African Charl Schwartzel, who took the 5-under 65 lead in the first round of the $25 million tournament at Centurion Golf Club near London.

The rankings had a strong African flavor with four South Africans and Zimbabweans occupying five of the top six players. Thai Phachara Khongwatmai was the only outsider in T-3 with 3 under 67.

Madappa had an eagle, three birdies, two bogeys and two double bogeys in his card when the players went for a shot gun start.

He threw the par-5 13th and almost pocketed it for an albatross. He doubled par 4s, nines and 16s.

South Africa’s Hennie Du Plessis (66) was sole second with 4-under, while Scott Vincent and Khongwatmai of Zimbabwe finished third with 3-under, while Branden Grace and Justin Harding finished fifth with 2-under.

Two of the top stars, Dustin Johnson and Phil Mickelson, were among the four, along with Sam Horsfeld and Laurie Canter, to finish at 1-in seventh.

The highlight of Schwarzel’s card was his 6-under-30 on the back nine, while Du Plessis had three birdies early on in a four-hole stretch.

With 9-under, they lead the $5 million team event by six shots.

The 48 players were divided into teams of four. Hy Flyers GC and Crushers GC are the closest chasers at 3 under.

The event is a 54-hole, par-70 no-cut competition and is part of a series of eight events in 2022. This week’s winner in London will receive $4 million.

Shortly after the first shot, Schwartzel, the 2011 Masters champion, was among 17 golfers banned from the PGA Tour.

However, 10 of the 17, including Schwartzel, had already canceled their PGA Tour membership.

Tough start for Diksha, Tvesa and Sharma in Sweden

Indian golfers Diksha Dagar, Shubhankar Sharma and Tvesa Malik have had a difficult start in the Volvo Car Scandinavian Mixed and are in danger of missing the cut.

All three need solid second-round cards to see them through the weekend. The top 65 and ties will make the cut.

Sharma, who has missed four cuts in the last five starts, is likely to miss another. He had two birdies, four bogeys and a double bogey.

Meanwhile, Italian amateur Carolina Melgrati produced a spectacular opening round of 7-under-65 to take the four-man lead.

The Volvo Car Scandinavian Mixed is a joint LET and DP World Tour event featuring 78 men and women each competing for the same $2 million prize fund and trophy hosted by Henrik Stenson and Annika Sörenstam.

Melgrati, 19, who finished T4 at last week’s Ladies Italian Open, landed an eagle on par-5 in 11th, alongside six other birdies against just a bogey in eighth.

Melgrati was joined at the top of the leaderboard by Scotland’s Craig Howie, France’s Matthieu Pavon and Spain’s Santiago Tarrio, all making rounds of 65.

Four players finished fifth, including England’s Liz Young and Sweden’s Linn Grant, after firing both rounds of 6-under 66.