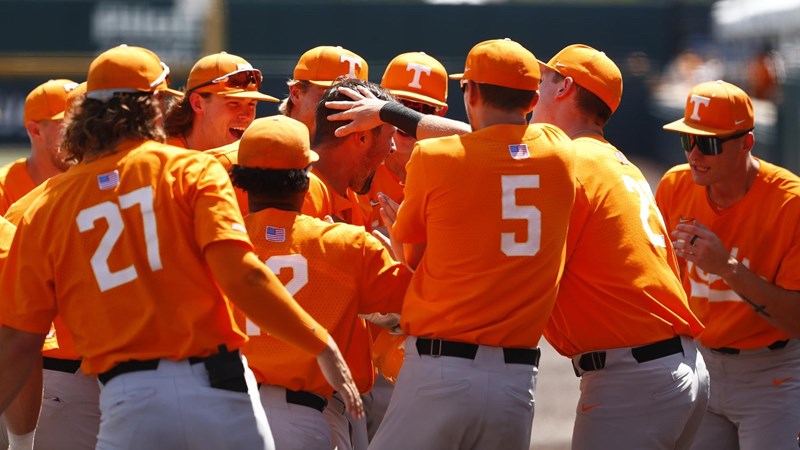 KNOXVILLE, Tenn.— Fueled by an eight-run blast in the fifth inning, the top-ranked Tennessee evened its super-regional streak against No. 6/17 Notre Dame with a convincing 12-4 win Saturday afternoon at Lindsey Nelson Stadium, forcing a win-for-win. all game three on Sunday.

The Big Orange hit four long balls, including a pair, in that crucial fifth inning Luc Lipkius and another from Evan Russelwho both now top UT’s career home runs list with 39 each.

Lipcius accelerated the Vols’ attack with a monster tag on the plate, going 3-on-4 with three runs scored and four RBIs to match his two homers. Seth Stephenson and Jordan Beck also had several hits that day, finishing with two each. Stephenson scored three runs while Beck drove a bang across the porches in left field in three runs to give UT a 5-0 lead in what ended up being the game-winning strike.

Second starter Chase Dollander was back to himself on the mound and put in an excellent performance with seven strong innings. The Georgia native allowed just two runs (both earned) on five hits and no walks while hitting five to earn the win and improve to 10-0.

After fighting from the back in each of their last three games, Tennessee (57-8) batted first on Saturday and put a run to the top of first. Stephenson led the game with a single to center field and came all around to score with a double by Trey Lipscomb three batters later.

Neither team was able to scrape a run over the next three innings before UT’s offensive burst at the top of the fifth. The Fighting Irish (39-15) came on the board with runs in the fifth and sixth innings to reduce their deficit to seven, but the Vols responded with a three in the seventh to end the game.

A double homer by Jack Zyska at the end of the round of 16 set the final score. The senior left fielder was the only bright spot for the Irish, who went 4-on-4 with a run made and two RBIs.

NEXT: UT and Notre Dame will go head-to-head in a do-or-die match three at 1:00 p.m. ET Sunday, with an Omaha spot at stake. Sunday’s competition will be broadcast on ESPN.

HOMERUN DERBY: The Tennessee Bats put on a show in their fifth inning with eight carries and hammered four homers in the frame. It was the sixth time this season that the Vols had hit three or more homers in an inning, and the second time this year with an inning with four homers (Bot. 8 vs. Auburn on April 29).

DOE IS 10-0: By collecting the profit, Chase Dollander remained perfect in terms of year-to-year tally, improving to 10-0 on the year. The last SEC pitcher to start a season 10-0 was Arkansas’ Blaine Knight in 2018.